There are three basic types of the twinning of crystals; (i) Contact Twins, (ii) Penetration Twins, and (iii) Repeated Twins. 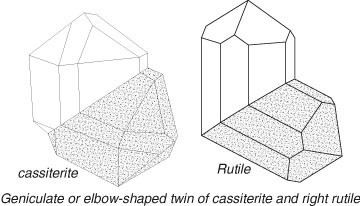 When two halves of a twinned crystal are symmetrical with respect to the twin plane, it is called ”contact twin”. Contact twins have a definite composition plane, which separates the two halves and the twin is defined by a twin plane. Crystals of rutile and calcite exhibit contact twins.

When the two individual crystals appear to have penetrated one another, it is called ”penetration twin”. Penetration twins have an irregular composition surface and the twin law is usually defined by a twin axis. The main feature of penetration twin is that it can not be divided into two separate halves. Crystals of Staurolite and Flourite commonly show penetration twin.

When a twinned crystal is composed of three or more parts which are related to one another by the same twinning law, such type of twins is known as ”repeated” or ”multiple twins”. The repeated twins are unclassified into two types; one is polysynthetic twins, and the other is cyclic twins.