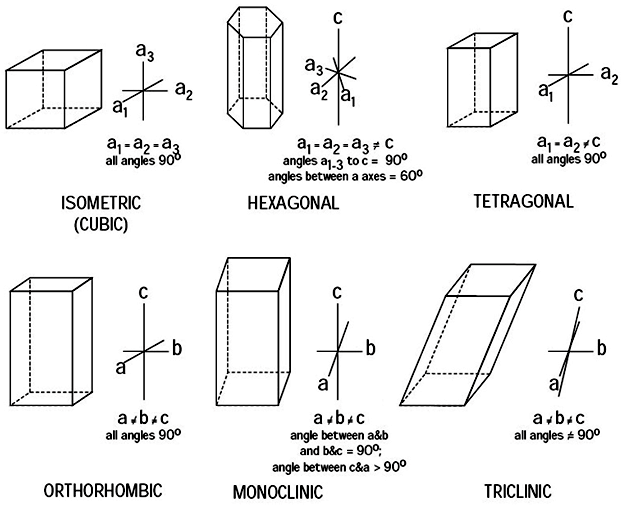 The crystals belonging to this system have three mutually perpendicular axes of equal lengths. These axes are designated as a1, a2, and a3. The axes of cubic/isometric crystal systems are as follows.

The crystals of this system are referred to as three mutually perpendicular axes. The two horizontal axes are equal (a1 and a2) and the vertical axis is longer or shorter than the other two.

In the crystals of the hexagonal system, there are four crystallographic axes. Three of these are of equal length and lie at angle of 120 degree to each other in the horizontal plane. These are designated as a1, a2, and a3. The fourth axis is vertical and is either longer or shorter than the other axes.

The crystals of this system have three mutually perpendicular axes of different lengths. They are designated as a, b, and c.

In the crystals of this system, there are three unequal crystallographic axes. The ‘a’ and ‘c’ axes are inclined to each other at an oblique angle and the ‘b’ axis is perpendicular to the plane of the two.

There are three unequal axes all intersecting at oblique angles.